The best Finnish student game was chosen in Bit1 Game Awards held in Tampere on 7-8th May 2019. The 12 finalist teams had been selected from regional PreBits arranged in Helsinki, Tampere and Turku. Oulu region didn’t have PreBits this year, but they had three teams to send to the finals. During Bit1, the judges gave notions on the team work, game development level and pitching.

Bit1 Jury was five top names from the Finnish Game Industry. They were asked to share their expectations of the Bit1 teams’ games.

Kalle Kaivola is a partner at Sisu Game Ventures. He has studied computer science and worked in multiple media positions covering the game industry and eventually started in a game production position in his first development role.

Mariina Hallikainen is the CEO of Colossal Order Oy with a decade of experience from the field. She was “Hoping to see a clear vision, understanding of the target audience and fun, polished games from the Bit1 teams.”

Juha Huhtakallio is General Manager, Game publisher and Funder at Playstack Finland, with a long track of experience in the industry. “I was originally starting this for one simple reason. Helping the teams to get opportunities for publishing and funding, visibility and employment. I expect to find the next “Rovio” from one of the Bit1’s.”

Antti Ikäläinen is Operations Manager at Traplight. He started his career in the industry as a QA tester for EA just by accident. He expected to find “Well polished, fun to play game products with a solid eye for scope – in games, quality comes from understanding what your team can achieve in a set period of time.”

Teemu Närhi is the CEO of Fingersoft. He started out programming games as a hobby and entered the industry officially in 2009 to form a games studio, and soon after that joined Fingersoft as an iOS developer. “I was judging a similar competition held in Japan. The quality of entries was quite high and the best teams were able to squeeze numerous novel ideas into polished and intuitive packages. I would love to see something like that here as well, hopefully with a bit more of a business angle on the side.”

The jury is listening to pitches. Photo: Toni Pippola

What is a good game?

Judges did get to see what they had been expecting. Mostly they were positively surprised of the quality of games competing in Bit1 2019. The father of Bit1 competition, Juha Huhtakallio reminded that “The students start wherever they want and it makes their games fresh. The Bit1 2019 saw different projects, stages and games. All have passion for it. As a judge I was paying attention to simple, great ideas and their execution. How’s the team, are they valid to complete their ideas.”

Kalle Kaivola pointed out that all the passion he has seen in Bit1 competition, needs to be tempered before it becomes professional: ”There’s no need to obsessing over the business thinking, if you do, you’ll never make a good game. If you want this to be a passion project, hobby thing, great. But if you want this to be a daytime job, business must come along.”

Antti Ikäläinen reminded that as a judge, while paying attention to the good quality of the gameplay, it’s also crucial to analyze how long the team has been working on it, and their scope. Ikäläinen wanted to see how developers were showcasing what they can do and if they understood their own qualities as game developers. “In Bit1 2019 competition, some games were more polished, some even at launch stage, ready to ship them. Others had been only starting six weeks ago. There were really high quality games”, Antti concluded.

Teemu Närhi enforced: “Quality has been great, as a game needs to be fun and also the team needs to be pulled off. This year I’ve seen loads of interesting ideas, large scale of careful to little bit more high yielding projects. The game entries have proper gameplay quality, teams were well prepared.” He also reminded in his keynote speech that ideas have no value, it’s all about the implementation. 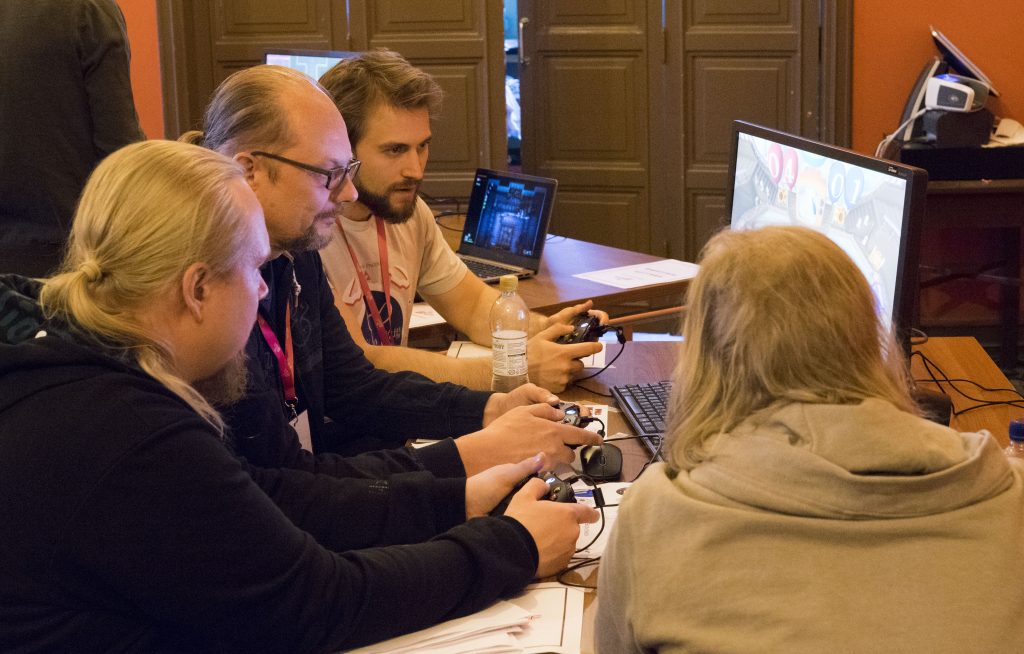 How to sell your idea?

The PreBit preliminaries required teams not only to produce a game with core play to be tested, they also had to think about their future business. To whom they sell, how much uploads expecting, defining their scope. The level of business skills were not the main key for success in the competition.

In judge’s eyes, some of the Bit1 2019 finalists had better games than pitches and some pitches better than actual games. The pitches didn’t affect on the final score, but their purpose was to give background information of the team and the game.

Juha Huhtakallio:”At the first event in 2018, some teams were lost. This year all pitches are pitches, games are games and not unfinished like last year.” Teemu Närhi, also judging for a second year: “In pitches I looked for charisma and coherence. The Bit1 event format is getting clearer and students know where they are coming to.  I’m happy to see more confident pitches!”

All the competing pitches were streamed and can be found on Bit1 Facebook page https://www.facebook.com/bit1event/videos/875983229407111/

Do we need Bit1 competitions?

Bit1 2019 was the second edition of the best Finnish student game event. In judge’s opinion the competition is useful to the industry. As Juha Huhtakallio sees the purpose of Bit1 competition: “Getting the industry to see that the student games are not so bad. This year more teams have already products, not just games.”

In student game projects, the possibility to be creative and start developing a game around any idea is unique. Later, when entering the industry, there are more restrictions. As Teemu Närhi put it, the Bit1 event has “impact on Finnish game industry: it’s great to actually see what students and next generation can achieve. It’s important. Good to have students pitch to their future employers and get feedback!”

In Antti Ikäläinen’s perspective, “Lovely event, showcasing student talent, also imitating the real world, Bit1 has impact on the industry – I emphasise that it is a valuable experience to attend competitions.“

Mariina Hallikainen was judge for the first time in this type of event. She saw passionate teams, great games and had a blast. “This kind of experiences are pretty much normal in game industry, so this is an excellent chance to practice for real life. You’ve shown really high quality, so all of you be proud of what you’ve achieved. Everyone, get those games done. Consider, even if you don’t make a successful business out of this, show that you’ve shipped a game and been part of the making this game – it’s part of your professional portfolio. Kudos to the schools and the teams that have achieved the demo stage.”

Also the competitors felt that the participation and the given feedback was valuable to them. Many said to be positively surprised by the quality of the event.

Bit1 jury chose three winning teams and the audience could vote for their favorite game on site. Winner team of Bit1 2019 was student team from Tampere, Sockman – with the game Sockman. The jury stated: “The game controls felt really nice and responsive and so did the team with given feedback. We valued that. We liked the story, the background setting. We also felt that the team works well together.” 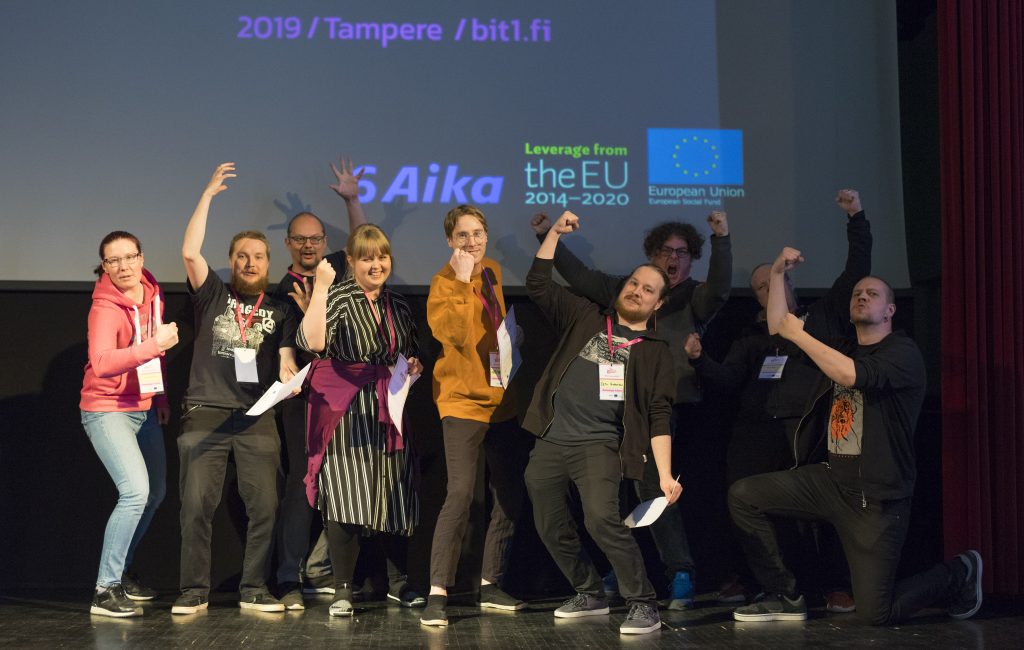 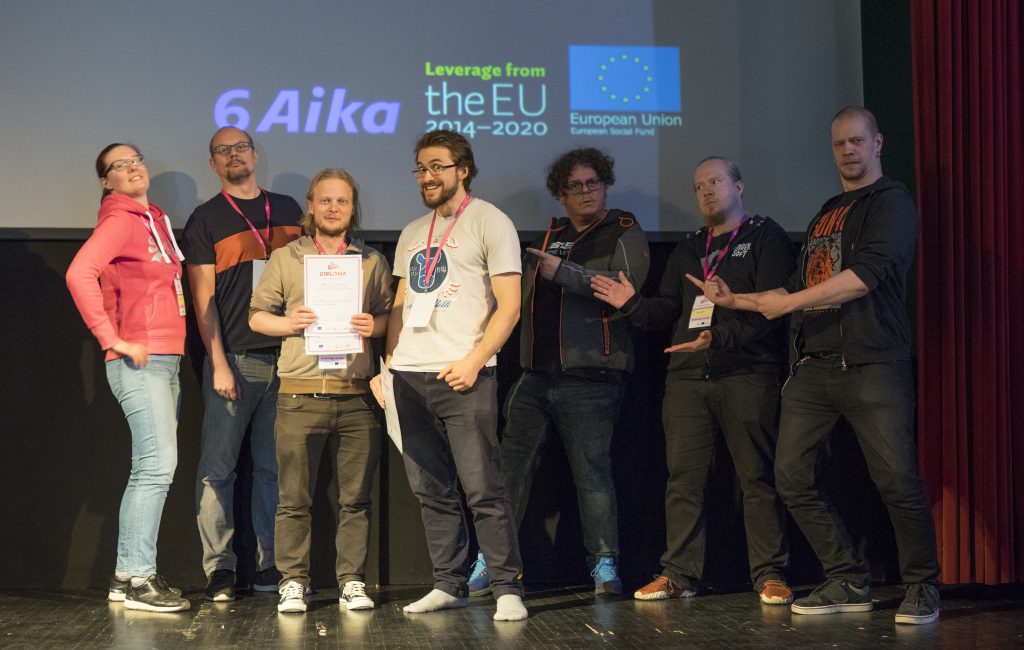 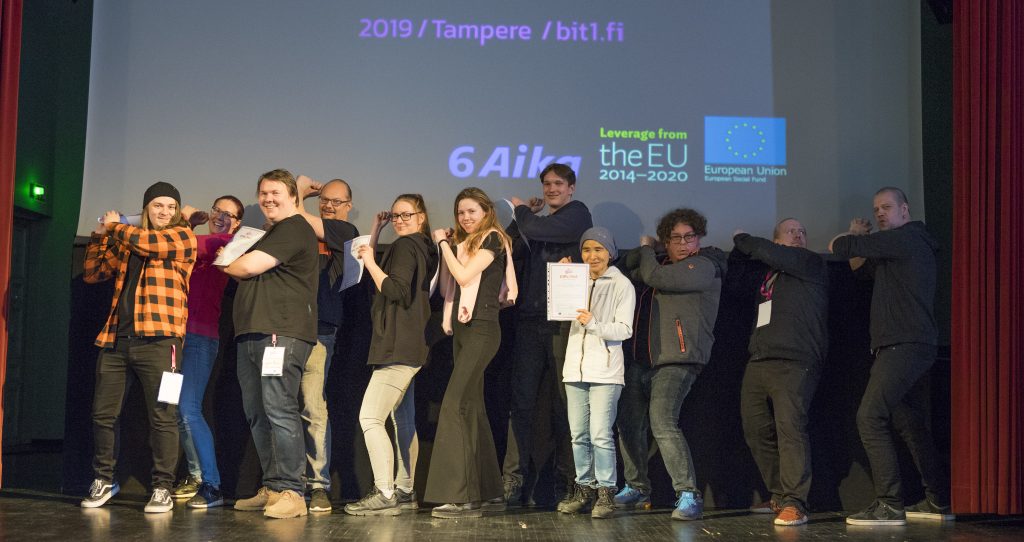 This year the Bit1 2019 prizes were sponsored by Games Factory Talents and Chips for Game Skills -project: travel stipends and tickets to Finnish Game Day and White Nights Conference in St. Petersburg in mid-June. Also the winner was invited to PlayStack’s publishing meeting to their office in Helsinki.

Thanking all the competitors. Find the finalists on Bit1 web page https://www.bit1.fi/competition/finalists/

More about the Bit1 from event’s webpage